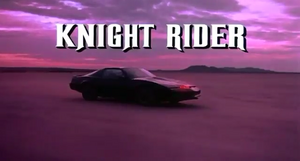 Knight Rider is an American television series that ran from September 26, 1982, to April 4, 1986. The series was broadcast on NBC and starred David Hasselhoff as Michael Knight, a modern-day "knight" who drove an advanced car called K.I.T.T. with artificial intelligence while fighting crime.

Conceived and produced by Glen A. Larson, the show was an instant hit.

The intro through out most of the episodes, always began with a narration:

"Knight Rider, a shadowy flight into the dangerous world of man who does not exist.

Michael Knight, a young loner on a crusade to champion the cause of the innocent, the helpless, the powerless in a world of criminals who operate above the law."

Throughout most of the first season, the outro was Michael and K.I.T.T. driving though a road in the desert with Wilton Knight's words of "One man can make a difference Michael."

Then the narration goes on to say:

"Michael Knight, a lone crusader in a dangerous world. The world of the Knight Rider." The Outro of some of season 1 and the entries seasons 2 and 3 was Michael and K.I.T.T driving into the sunset, for Season 4 they drove toward the camera in super pursuit mode.

Universal Studios has released all four seasons of Knight Rider on DVD in regions 1, 2 & 4. A complete series box set featuring all 90 episodes in a collector's edition box has been released in regions 1

On March 8, 2016, it was announced that Mill Creek Entertainment had acquired the rights to the series in Region 1; they subsequently re-released the first two seasons on DVD on May 3, 2016. On October 4, 2016, Mill Creek re-released Knight Rider- The Complete Series on DVD in Region 1.

In Japan, NBCUniversal Entertainment Japan—a subsidiary of NBCUniversal—released a Blu-ray box set containing all four seasons, replicas, props, and memorabilia under the title ナイトライダー コンプリート ブルーレイBOX (Knight Rider: The Complete Series). The set is limited to Region Code A, which includes the U.S. It was released on November 27, 2014.

In North America, Mill Creek Entertainment released the complete series on Blu-ray in Region 1 on October 4, 2016.

The series is currently available for streaming on both Netflix and Peacock. The series can also be purchased on Prime Video and Vudu.

Community content is available under CC-BY-SA unless otherwise noted.
Advertisement