Knight Rider is a new movie which will continue the stories started in Knight Rider. However there is a new generation of characters. K.I.T.T.'s creator Charles Graiman has made a new K.I.T.T., the Knight Industries Three Thousand. His daughter, Sarah Graiman, and Michael Knight's son Mike Traceur, team up with the new K.I.T.T. to rescue Charles Graiman when he is kidnapped. They are helped by FBI agent Carrie Rivai.

Mike Traceur is awakened by his friend Dylan Fass to deal with two men who are attempting to collect a $90,000 gambling debt. Traceur's car breaks down when he attempts to flee, and the men threaten Fass's life if Traceur does not pay the debt. Mike goes to the ATM to get some cash to head to the Montecito Casino, playing poker in an attempt to repay his debt. He is initially resistant when Sarah Graiman asks for his help, but agrees when she offers to pay his debt, and the two set out to find out what happened to Charles Graiman. While they were inside the casino, mercenaries looking for Sarah found her and Mike. KITT tipped them off and assisted in their escape. Mike didn't know the person who helped them escape was KITT; to his surprise when he got into the KR Mustang, it was an advance AI car that spoke to him the entire time.

They found out that the mercenaries are after a system that Charles Graiman designed called Prometheus, which controls the entire U.S. defense network. The information needed to take control of the system is contained inside Graiman's hard drives. The mercenaries stole them; the data is encrypted and only Graiman and Sarah know the encryption keys. KITT also possesses the data and the ability to access the system. Charles enlisted the aid of Jennifer, Mike's mom, to help him reach a safe place to contact KITT. Once at the motel, Charles gave KITT his coordinates to rendezvous and leave together.

KITT, Sarah, and Traceur arrive to find that the mercenaries have already reached the motel, but have yet to find Charles (as he has checked into four different rooms). With the help of KITT's infrared sensors, Traceur finds Charles and his mother and brings them to safety, avoiding the mercenaries. Jennifer (Mike's mom) and Graiman reveal to him that his father was a man named Michael Knight and that he drove the first KITT, forcing him to stay away from his family. Traceur is still absorbing the weight of this information, when they reach KITT, and find that one of the mercenaries is hacking into his system. Graiman asks KITT to shut-down to prevent further infiltration and suggests Traceur drive the car manually.

As the group is preparing to leave, the mercenaries are joined by the sheriff to get Charles. Jennifer was asked to disarm herself, but was shot in the confrontation when she tried to shoot them. Two of them and the sheriff take Charles away and the other two are left to kill Traceur and Carrie Ruvai and watch over Sarah and KITT. Traceur and Ruvai overpower them, and Traceur and Sarah take KITT to chase after Graiman, while Ruvai stays behind with Jennifer's body.

During the chase, Mike has difficulty pursuing the mercenaries. To Mike's surprise, KITT is sustaining damage from gun fire. Sarah explains that the self repair feature only activates when KITT himself is active; otherwise KITT is vulnerable like a regular vehicle. After exchanging fire, Traceur reactivates KITT with just enough time to activate his armor without allowing the mercenaries to completely hack into his system. He turns KITT into the mercenaries path, causing a massive collision; KITT survives with no damage, while the mercenaries' SUV is heavily damaged by the impact. Charles survives with minor injuries, while all his captors are mortally wounded or have been killed.

On the way to Jennifer's funeral, Graiman reveals that he's re-forming FLAG and offers Traceur the chance to drive KITT permanently, which he refuses on grounds of philosophical differences, saying "I just don't believe in the same things you do."

At the funeral, Traceur meets his father, Michael Knight, who tells him what Wilton Knight once told him on his death-bed, that one man can make a difference, and that he (Knight) was that man. They shake hands, and as Knight prepares to leave, Traceur stops him and asks if they will ever meet again, to which Knight responds "I hope so." That fateful meeting with his father convinced him to join the foundation and become the next Knight Rider. 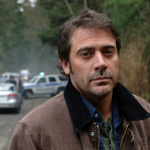